Family Sharing was first introduced by Apple in iOS 8 back in 2014, and I think it’s become one of Apple’s best service. In a short few years, it’s become a rock solid service that could end up saving your family a lot of money and headaches. That was not necessarily the case early on when it first came out, as it was very buggy and simply didn’t work very well.
This service fills a need that many families struggled with for years, which is the ability for members of a family to charge all of their purchases on one card, without forcing everyone to use the same Apple ID. For many years before Family Sharing became available, parents and kids would share the the same Apple ID on all their different phones and computers so that all purchases could be charged on the parents credit card.  But that often created major havoc in the process. I’ve often worked with clients who were getting their kids text messages, or had contacts, photos or videos from other family members on their phone because everyone was sharing the same Apple ID. Another big issue has been some family members running out of iCloud storage because Apple only gives you 5 Gigabytes for free, which can get used up very quickly if you take a lot of photos.
These problems can now easily be fixed by setting up everyone with their own Apple ID and using Family Sharing. 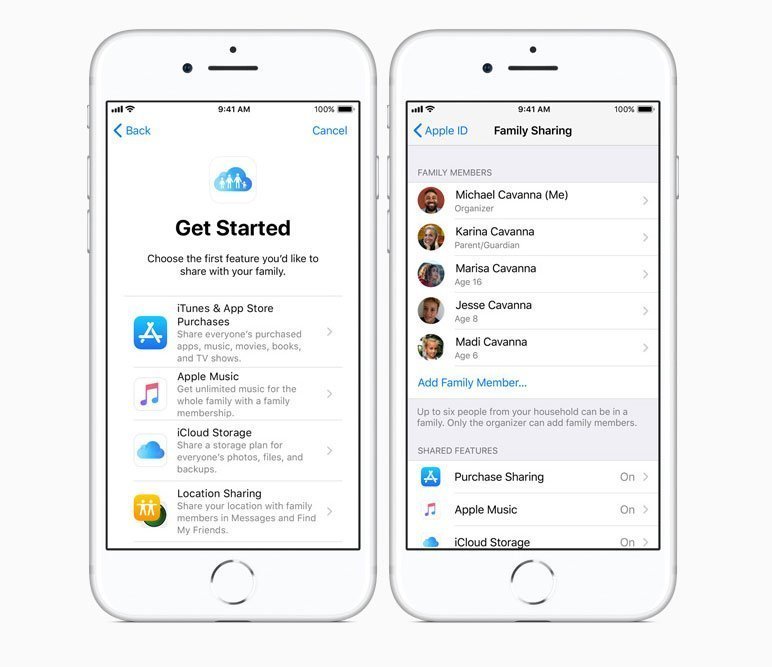 Family Sharing does a number of things. One of the key feature of Family Sharing is that it allows up to 6 people to share a single iCloud storage plan of either 200 GB or 2 TB.  One person in the household is designated as the organizer and invites everyone else into the plan. From that point on, everyone on the plan gets to use that large iCloud plan and everyone gets to share all the family’s purchases on their own devices. So, any apps, games, Apple Books, music, movies, or TV shows that anyone purchases becomes instantly available to everyone else on the plan. There a few restrictions which I will cover later, but for the most part, it’s pretty straight-forward.

Family Sharing can also be used to do other things such as using parental controls and setting limits on devices, so that a child can only play games for a set amount of time per day for example. Or to prevent explicit or adult content on a child’s device. You can also limit in-app purchases for somebody’s devices so that they cannot overspend in a game for example. You can also share your location with your family, or choose not to. You have full control over all of these things. You can even help family members locate their missing devices in Find My iPhone.

It’s also important to note that this not only works with iPhone and iPad apps, but also works with a lot of purchases for the Mac. If a Mac app you purchased on the Mac App Store supports Family Sharing, people in your group can also use that app. So for example, if you purchase something like Apple’s Logic Pro X or Final Cut Pro ( which costs $300),  you can share it with your family. That is potentially a massive savings compared to having to buy the software separately for someone else in the family. Whenever you look at an app in the App Store, if you scroll all the way down at the bottom of the page, you can see if it supports Family Sharing.

In conclusion, Family Sharing has become an extremely useful service from Apple. Whether you have a family of two, or a family of six, you can probably benefit quite a bit from everyone sharing each others purchases and subscriptions. The savings could add up to quite a bit of money saved compared to everyone purchasing everything individually. Also keep in mind that Apple doesn’t actually require for anyone on the plan to actually be related or married to you. In reality, you can invite pretty much anyone to be into your Family sharing plan.